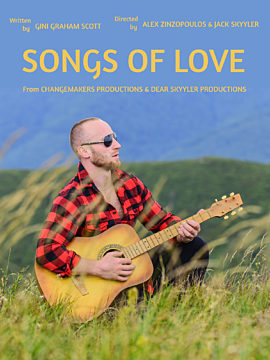 Songs of Love is about a nerdy, lonely guy, Rick, who is continually made fun of while he is growing up and he retreats into his music. Then, as a teenager he is attracted to a girl in school, writes songs about her, but he is too shy to tell her.

Then, he starts performing at a club, and one days she comes in with some girlfriends, and she likes his music. So he soon tries to send her different songs he has written. She thinks they are clever, but her girlfriends tease her and her current boyfriend makes fun of Rick. But finally, after he wins a song contest with his latest song to her, he invites her to the award ceremony, and after a fight with her boyfriend, he finally wins her over, and she becomes his greatest fun.