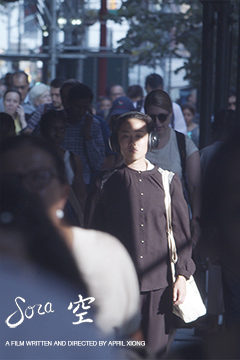 Sora is a love letter to braving the vicissitudes of life, as well as a celebration of community and diversity. It is a feature film, told in a series of vignettes set over the course of four seasons, from summer to spring. Five years after the suicide of her partner Sora, Maria Elena still feels numb from grief. She works at an office job she cannot enjoy, going through the motions of existence. When she discovers Brazilian zouk dance and the tight-knit community surrounding it, her journey to reinvent her life begins. Summer passes in a dreamlike blur, with visions from the past intruding on her present. After listening to a voicemail left by her mother, Maria Elena is forced to confront the difficult emotions she’s kept locked away. In the fall, she journals about these emotions, as well as her observations of other people surrounding her. In the winter, Maria Elena starts to take more action in her life. She adopts a stray cat and decides to go back to medical school. She also reunites with the friends and family she pushed away after Sora’s death. The film ends in spring, with new life blooming all around her. Similarly, Maria Elena is revitalized by her newfound resolve to live fully and, in this way, honor Sora's memory. In the last scene, Maria Elena dances with utter joy and abandon. Freeze frame on her smiling face.