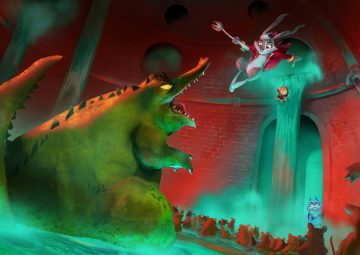 Spike is a lonely 12 year old orphan hedgehog who has lived alone in a lighthouse outside New York City for some time. She’s particularly envious of the family of 46 rabbits over the road and thinks "who would notice one more kid"? When Walter, father of the multitude, finds out he’s expecting another set of twins, he is not a happy bunny. Helping Spike to cross the road, Walter is hit by a car, losing his memory in the process, and Spike then spots her chance to grab herself a dad. She persuades Walter that he’s not only her father but actually a superhero, the fearless Lord Rumbuck! Walter embraces his new persona rather too enthusiastically and before they know it, the two of them are off on a madcap adventure to the big city. After rescuing a ‘princess’ from a magician, seeking out the ‘scrolls of adoption’ from a rather scary lawyer, being eaten alive by a giant alligator and chased by a multitude of angry rats and other animals, Spike realises that maybe her quest for a fantasy father has gone too far and it’s her turn now to turn hero to save the day and Walter’s family.