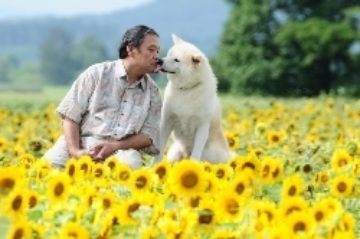 One countryside town in Hokkaido, Japan. A six-month-old dead body and a one-month-old dog’s body are found inside a car left aside on a forest path.
Town hall’s social welfare service department where Kyosuke Okutsu works, receives a report that an unidentified dead body has been found. To collect unidentified dead bodies and to hold a memorial service for them was one of the social welfare service department’s duties. According to the police, the dead body was about fifty years old with nothing to show his identity. When Okutsu visits the incident scene, he finds a receipt from the goodwill shop inside the car.
“Oh well…here’s another extra duty” mutters Okutsu. His journey of tracing back the man and the dog’s las days has just begun.
Tracking down the man and the dog’s life, Okutsu finds that that man “Dad” (55) had suffered from a chronic disease, lost his job, was divorced by his wife, his family separated away, gave up his house, when finally, he decided to go on a journey with his dog “Happy” heading towards his hometown. Okutsu hears stories about the two from people whom have met them when they were alive. Helped a runaway boy who was trying to shoplift, only to end up losing all his money to the boy…Sold all his belongings to take Happy to the animal hospital to save him from a sudden illness… Okutsu can see Dad’s personality and the happy moments he spent with Happy.
Okutsu lost his parents in a car accident, and was raised by his grandparents. He looks back on his lonely life, and synchronizes himself with Dad and Happy. When Okutsu was a little boy, his grandfather gave him a black little puppy named “Kuro”. However, it was only at first Okutsu took good care of “Kuro”, and by the time he was in junior high school, he was irritate by “Kuro” since he would follow Okutsu around. Kuro always watched the stars as if he wants to keep one for himself. Okutsu thought “You would never get one. It is nonsense no matter how long you watch them, you Star Watching Dog”.
However, when Okutsu arrives at Dad and Happy’s final destination, he realizes how much Kuro had saved him from by just staying by him in his lonely life when he was growing up. Finally, Okutsu discovers how Dad and Happy ended their journey…