Home / Films / Stardust Over the Town 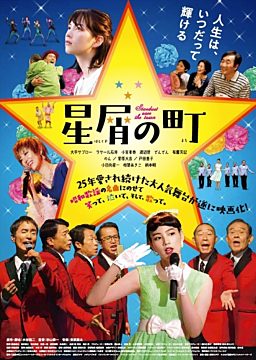 Stardust Over the Town

“Osamu Yamada and Hello Nights”, a band headed by a former employee of major record label Osamu Yamada, followed by drinking buddies Toshiki, Akira, and Goro as the chorus, and a singer who is not popular at all Shingo as the lead vocal. Kazuo, who took over the debt on the band, later joins as the member. After ten years, the band does not still have a hit and have been barely surviving, making tours in provincial areas with a veteran singer, Kitty Iwaki.

One day the band is invited for a performance at a small town in province where Osamu was born. Eiji, a younger brother of Osamu, does not feel comfortable on his return. Ai, a friend of Eiji’s son, helps her mother to run a bar, dreaming of being a singer someday. She runs after a member telling that she wants to join the band…