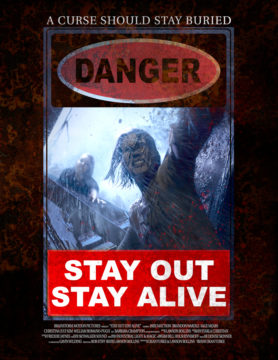 A group of friends hiking in Yosemite become alarmed when their friend Donna goes missing after taking a walk alone and an earthquake hits the area. Their search finds that the earthquake plummeted Donna into a long abandoned mine, pinning her leg under a rock and making her unable to climb out.

When one of the group climbs down to try to rescue her, he discovers that the mine shaft is actually an abandoned goldmine, ripe with gold.

The giant rock pinning down Donna proves to be too heavy for them to move without equipment. But, despite her pain, Donna wants the gold, too, and convinces the rest of the group not to call the park ranger for help until they unlawfully mine the gold for themselves.

Unbeknownst to the group of friends, there had been a curse put on this gold mine years back to avenge a murder. Whenever a tremor opens the mineshaft luring unsuspecting people to the gold, those that do not heed the warnings to STAY OUT were unable to STAY ALIVE.

The world between natural and the supernatural is blurred when these five go from friends to estranged, turning on each other as they become more and more consumed with greed that turns to madness.

VISUAL EFFECTS by the legendary INDUSTRIAL LIGHT AND MAGIC