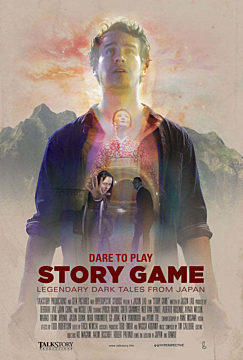 On a camping trip in Hawaii, three fine art students make a bet: who can tell the best supernatural story? But not just any ghost story. According to the rules of the STORY GAME, each tale must have three items: a metaphysical piece, a character with green eyes, and a Japan location.

First up, the graphic artist. She weaves a tale of Japanese high school girls bullying a classmate. It’s classroom pranks until they confront HANAKO, the ghost who haunts the women’s bathroom. Next up, the screenwriter. He tells the story of a businessman obsessed with a seductive woman he meets on his commuter train. When he catches up to her, she reveals her true self: KUCHISAKE-ONNA - the infamous slit-mouthed monster. Last up, the novelist. She tells the Edo period classic myth of OIWA. A jealous wife obsessed with a young maid who drives her insane.

STORY GAME brings three famous Japanese ghost stories to the world. Each fable has been adapted for a Western audience. It’s an eerie time around the campfire, as the students try to outwit each other with ghostly tales while playing to win the STORY GAME.