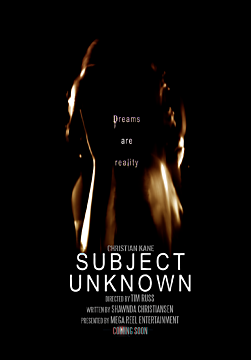 The body count continues to rise and each victim is killed by a different method, making it impossible to track, and impossible to determine if it's a serial killer or multiple Unknown Subjects.

Detective Chase Stevens (Christian Kane) boasts a reputation for cutting edge instincts and an understanding of what makes people tick. As the lead homicide detective in the country he has become a celebrity in his own right with a best-selling book “Unknown Subject” which highlights the most compelling cases he's ever cracked.

Steven’s instincts run much deeper than anyone could have ever imagined. Shortly after finding the lifeless body of his little brother Alex, he began experiencing recurring nightmares of homicide. Over time he found out that the scenarios in these nightmares were appearing in newspaper headlines, which drove him into harnessing his dreams, and ultimately catapulted his career as a homicide detective.

When Steven's becomes the target of this killer's rampage, he finds his dreams are of zero use, and the people he thought were his friends may be the one's setting him up. No-one is safe, no-one can be trusted, no-one will believe the truth, and no-one will ever be the same.