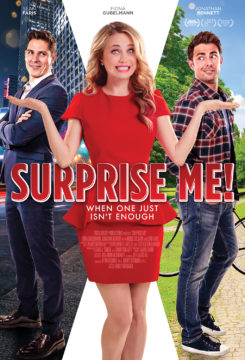 Genie Burns (Fiona Gubelmann) is a surprise party planner who hates surprises. She has three men in her life: Her business partner STEVEN (LaShawn Banks), her college friend, DANNY (Jonathan Bennett), and her new boyfriend, JEFF (Sean Faris). As these relationships get confusing, Genie starts bingeing out of control. Therapist ELLEN (Nicole Sullivan) teaches Genie that “food moments” carry valuable information about what she feels, what her choices are, and the strength she has to make them. Meanwhile, Genie is contracted by an anonymous Hollywood producer to throw a surprise wedding for his girlfriend. Genie’s plan: They will pretend he's filming a movie with a wedding scene. He’ll give the bride and guests roles so they’ll attend. A glitch on the wedding day means Genie must dress as the bride. As she approaches the aisle, she realizes Jeff was the anonymous client, as Danny reveals his true feelings. Genie has decisions to make.