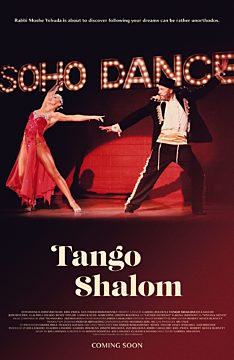 Moshe Yehuda, a Hasidic Rabbi and amateur Hora dancer, enters a big televised Tango competition to save his Hebrew school from bankruptcy. There is only one problem: due to his orthodox 􏰀􏰁􏰂􏰃􏰄􏰃􏰅􏰆􏰇 􏰉􏰁􏰂􏰃􏰁􏰊religious beliefs, he is not allowed to touch a woman! At odds with his wife and five kids, the Grand Rabbi of􏰌􏰁 􏰃􏰌 his orthodox sect, and Moshe’s entire Hasidic community in Crown Heights, Brooklyn, Moshe is forced to ask a Catholic priest, a Muslim imam, and a Sikh holy man for advice. Together, they hash out a plan to help Moshe 􏰑􏰏􏰍􏰒􏰁dance in the Tango contest "without sacrificing his sacred beliefs"...setting in motion a fun, passionate dance 􏰃 􏰟􏰏􏰇􏰇movie. Heart-pumping and heartwarming, “TANGO SHALOM” tests the bonds of family and community, and the bounds of tolerance and faith.