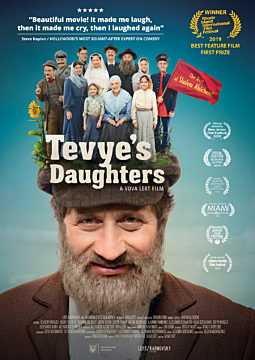 "Tevye's Daughters" is an authentic tragicomedy directed by Vladimir Lert. The screenplay is based on the famous play "Memorial Prayer" by Grigori Gorin. This play has been successfully performed for more than thirty years around the Eastern Europe. It is the early XX century. Tevye the Dairyman lives in a small village in Ukraine. He is poor and believes that his daughters have one chance to escape poverty - a successful marriage. Tevye accepts a profitable proposition from a matchmaker, but his beautiful daughters have a different plan. The film was shot at historical locations in Ukraine where the original stories of "Tevye the Dairyman" took place. Tevye moved to the village of Zabirie in about 1873. The villagers are proud that Tevye and his wife Golda became prototypes of stories "Tevye the Dairyman" - the classics of Jewish literature written by Sholom Aleichem. In the 1900s Tevye has built a new house. Villagers recalled Tevye living there and being a kind and a very brave man.