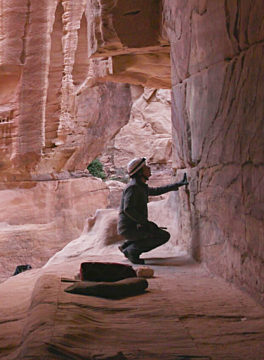 Outside a Middle Eastern city lies an ancient tomb filled with treasure, priceless relics, gold figurines and plaques. Discovered by an amateur archaeologist, this cavern, he claims, holds the remains of antiquity’s most infamous of characters, Alexander the Great.

The exact location of the tomb is known by this one man only, code-named The Inventor. However, the name ‘Alexander’ was enough to draw in the world’s foremost expert on Alexander the Great – as well as a team of eminent men, on six separate expeditions to uncover ‘the most mysterious archaeological discovery of all time.’

Using code-names, fending off fatwas, and stalled by military interventions, the stakes for his team are high, as they get tantalisingly close to solving history’s greatest enigma, and revealing the face of one of history’s greatest military commanders. A Soilsiú Films & Fine Point Films production.