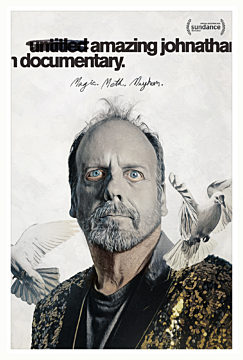 After illusionist ‘The Amazing Johnathan’ is diagnosed with a terminal heart condition and given one year to live, he’s forced to retire his act. Cut to three years later: Johnathan is not dead – much to everyone’s amazement – and documentarian Ben Berman (Tim & Eric, How to Lose Weight in 4 Easy Steps) films him on an epic comeback tour.

But as their mutual journey kicks off, Johnathan drops a bombshell that sends the film spiralling into uncertainty. Negotiation and access become the central threads that reveal – and further cloud – our understanding of the elusive protagonist resulting in a witty and meta commentary on the process and ethics of making a documentary. Embracing these unforeseen obstacles, Ben delves deeper to determine what is truth and what is illusion in this critically acclaimed film.