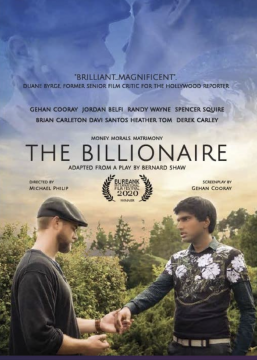 A gender swapped independent film version of George Bernard Shaw's play 'The Millionairess', transposed into a modern day scenario of primarily Gay characters, while also featuring a Sri Lankan actor in the empowered title role of 'The Billionaire'.

Stylistically and tonally, this film is a throwback to Classic Hollywood films like 'My Fair Lady' and 'All About Eve', with 'Downton Abbey' being a more contemporary point of reference perhaps.

It makes Bernard Shaw's sophisticated wit and old-fashioned British humour more accessible and relatable to a modern audience, by re-interpreting one of his 1930s plays and setting it in the contemporary context of Gay Marriage.