Home / Films / The Gangs, The Oscars, And The Walking Dead 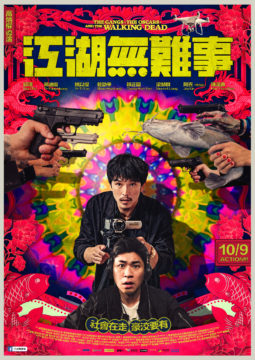 The Gangs, The Oscars, And The Walking Dead

Producer BS (Roy Chiu) and his director Wenxi (Ti-Yang Huang) have always dreamt to make it big in movie industry, but nothing’s even successful. They treat the filming in lots of occassions byt they still struggle financially. They even work for the mob to pay their debts.

One day, their creditor and the mob boss Brother Long (Shao-Hua Long) suddenly takes an interest in Wenxi’s script. He only has ne condition: to let his wife Shanny (Yi-Ti Yao) be the leading actress. They party all night long to celebrate. After they sober up, they find Shanny floating in the swimming pool, dead…They don’t dare to let the mob moss know, so they decide to finish the movie no matter what it takes, even with a corpse…