Home / Films / The Garden of Evil 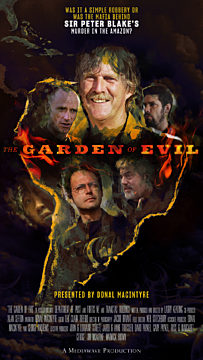 The Garden of Evil

This is a cross-genre story of crime, nature and adventure. It centres on two environmentalists Sir Peter Blake and eco-warrior Pete Bethune, who were brutally attacked in the Brazilian Amazon on separate expeditions 16 years apart. One was murdered and the other survived.
The Garden of Evil explores the possibility that the attacks might have been connected to powerful criminal organisations involved in lucrative but highly illegal logging and the trafficking of drugs and endangered animals.
Three investigative journalists and Pete Bethune seek the truth about who was behind the murder of Sir Peter Blake, a world-renowned yachtsman turned environmentalist. Together they unravel the connections between corruption, organised crime, and violence in one of the most dangerous cities on the Amazon.
Irish journalist & professor of criminology Donal MacIntyre leads the investigative team for eight weeks filming in the Amazon. Brazilian Caio Vilela and British journo Sam Cowie meet up with victim Pete Bethune, who faces his own demons at a crime scene he vowed never to return to.