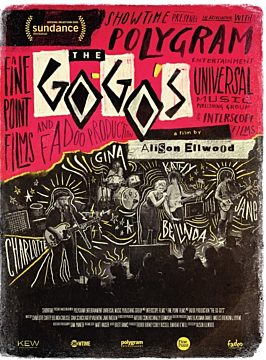 In their early days on the Los Angeles punk scene, Belinda Carlisle and Jane Wiedlin were inspired, ambitious and determined. They formed an all-female band – The Go-Go’s – learning their own instruments and writing their own songs.

Their ascent in the early 1980s coalesced with their electric chemistry. Combined with the birth of MTV and the music video, the band’s debut album Beauty and the Beat soared to #1. However, as the pressure of fame and success grew, hard drugs and alcohol, infighting and resentment started to take its toll.

With candid interviews from the band and other industry insiders, this definitive film uses first-person tales, hilarious anecdotes and juicy gossip to shine a light on the band’s talents and achievements – as musicians, ground breakers and survivors. Fine Point Films and Fadoo Productions.