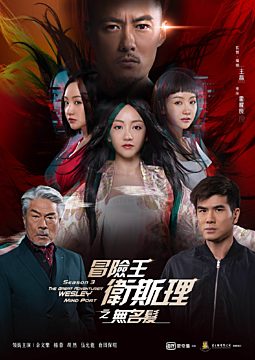 Based on the Chinese adventure-sci-fi classics, The Great Adventurer Wesley series tells the exciting quests of Interpol Special Agent Wesley (Shawn Yue) exploring the unknown and combating mysterious crimes around the globe.

Wesley and John Luo (Philip Ng) come to Japan to mend their broken hearts, only to run into Wesley’s ex-girlfriend, Sue Bai (Michelle Hu), who is investigating on a murder case in Japan. On the other hand, John Luo falls for a mysterious beauty at first sight amidst confronting the Dark Angels.

After rounds of investigation, they discover that the seemingly innocent beauty, Wu Ming (Yang Rong) is a serial killer. Moreover, she was the lover of the triad king in Japan, Fujiwara Ryota (David Kurata) more than 70 years ago. How is Fujiwara’s head all grey and Wu Ming still a young beauty?

Wesley and Sue join hands on the investigation and turns out Wu Ming has her eyes on Wesley's Blue Bible. Everyone teams up to root her out. Unexpectedly, she survives and gangs up with ex-lover mob boss Flint (Vincent Lam) …

What is it about the Blue Bible that gets Wu Ming so obsessed? Will John Luo and her relationship blossom eventually?