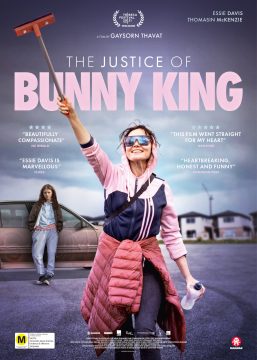 The Justice of Bunny King

An empowering and emotional tale of one mother’s fight against the system to keep a promise to her daughter. Starring Essie Davis (The Babadook, The True History of the Kelly Gang) and rising star Thomasin McKenzie (Jojo Rabbit, Leave no Trace).

Bunny King (Davis), a headstrong mother of two with a sketchy past, earns her keep by washing windows at traﬃc lights. Using her razor-sharp wit to charm money from gridlocked motorists, she saves every cent to get back the custody of her kids. After promising her daughter a birthday party, Bunny must fight the social services and break the rules to keep her word, but in doing so risks losing her children altogether. Accompanied by her niece Tonya (Thomasin McKenzie), a fierce teenager running away from home, Bunny is in a race against the clock and headed towards an epic showdown with the authorities.