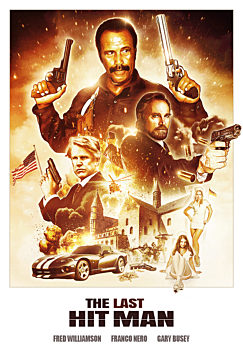 important than the special effects. The human conflicts these characters experience are what carry

was protecting is killed by a hit man. The department says Dak is old, incompetent and they lay him

off. Dak is determined to prove them wrong.

Slade Muso is the hit man the mob brings in from Europe to make the hit. Burdened with mounting

hospital bills from the care of his daughter who was hit by a car, Muso reluctantly takes the job,

vowing this is his last hit.

After he makes the hit, Muso returns to Europe only to learn that the people who hired him also

planned the hit and run accident on his daughter to force him into taking the job. Now Muso’s a

liability and instead of paying him, they want to eliminate him. Making matters worse, in order to

prove his credibility, Dak has followed Muso back to Germany and is hot on his tail.

As fate would have it, the two men have a lot to prove but they become united in the same task...

taking down Tony Gambello and the mobsters who ordered the hit. While a mutual respect grows

between the two protagonists, they both know Dak is there to ultimately arrest Muso. When Muso

tells Dak, “you will never take me back once this job is over”, Dak replies, “then one of us will die

He is the last hit man.