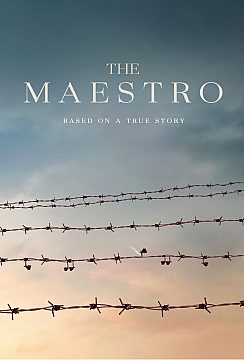 Fabio Brigante (Bova) is an an esteemed Italian composer and conductor, also known as The Maestro, who has been archiving all the musical works composed by Jewish prisoners in the Nazi concentration camps for the past twenty years. When Fabio and his wife Alessia (Gerini) are invited to Berlin to see the first original composition by Herbert Palitzsch (Kretschmann), a revered German orchestra conductor, Fabio thinks he recognizes the melody so might an elderly member of the audience who is conducting along with Palitzsch. But before Fabio can ask the woman if she recognizes the piece, she suffers a heart attack in the audience. When Fabio looks up at to Palitzsch's box of honor, he see Herbert's father, Kurt, coldly smiling at the old woman’s demise.

What Fabio doesn’t know is that Kurt was a Nazi Youth member during the Second World War, whose uncle oversaw Auschwitz’s operations. To illustrate the horrors at Auschwitz, the narrative shifts to Maria, a young naïve nurse who quickly discovers the atrocities were committed not just against the Jewish prisoners, but also against gay, Black and other non-Aryan prisoners who found themselves fighting for their lives against the Nazis. Struggling with her conscience, Maria helped the imprisoned musicians fight against their oppressors, using a mix of music and violence to try to regain their freedom.

In the present, as Fabio dives into research, he comes to believe that Herbert’s “original” composition may in fact have been written by and stolen from an Auschwitz camp inmate. Fabio enlists a journalist friend, Angela (Eido) to investigate Herbert for proof that he stole his score from a prisoner in the death camps. As the film cuts between the world of today and the surreal and the up-to-now unseen multicultural existence of Auschwitz in 1943, we inch closer and closer to the truth behind Herbert’s creations and Kurt’s past. Relying on his wife, his Mossad friends and the help of Herbert’s assistant, Fabio sets on a treacherous path to reveal this truth and unveil another Nazi secret, which has made its way into the contemporary classical music world.