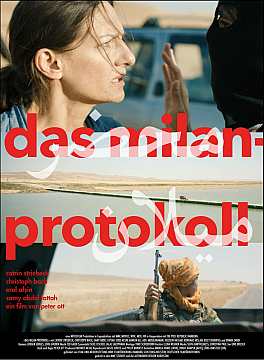 Martina works as a doctor in the refugee camps in the Kurdish region in northern Iraq. She is connected to the YPJ-brigades in northern Syria. They ask Martina to take care of a young German internationalist female fighter who has been injured severely in combat with ISIS. In an ambulance Martina crosses the Iraqi-Syrian border. On her way she smuggles a MILAN-system which has been part of the German arms supply for the Iraqi Kurds. The Emir of ISIS gets knowledge of this via the Turkish secret service. The Emir asks his ally Omar to get hold of the weapon. Omar's men seize the ambulance but instead of a MILAN they find a German female doctor, which they take with them. Omar is the military commander of a Sunni tribe which has pledged loyalty to ISIS. Omar wants to change sides again and considers having a German hostage in his hands would let his chances rise. One after another, several players take part in the case of the German doctor: Jamil, the sheikh of Omar's tribe, Abu Sadiq, emir of ISIS in Mosul, Murat, a Turkish intelligence operative and Moses who directs the BND-operations in Northern Iraq. And Martina who has to maintain every acting option.