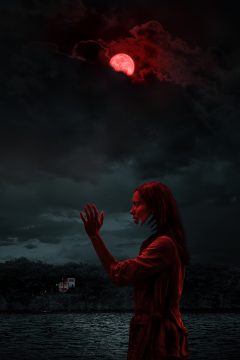 Married couple Owen and Beth lead a happy life in a beautiful, remote, lakeside house in small American town, until one evening Owen takes a boat into the centre of the lake and shoots himself in the head. Beth is devastated but returns to her job as a primary school teacher and tries to carry on. Alone in the house at night she starts to hear strange noises, and has sinister visions of a black figure, through the windows, behind the bed, in the corners. She finds photos of unknown, but familiar women on her husband’s phone and blueprints for an occult maze hidden in her belongings. Her discoveries lead her across the obsidian lake to a strange house, like her own but half-built, in reverse … a twisted, inverted reflection of her own. Who haunts Beth? Is it Owen? Or something beyond evil, beyond death to the darkness behind it. The terrifying answers lie in The Night House.