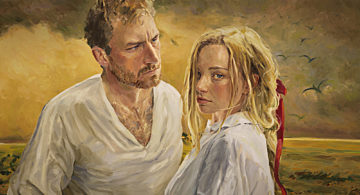 THE PEASANTS is a tragic story of a peasant girl Jagna forced to marry a much older, wealthy farmer Boryna, despite her love for his son Antek. With time, Jagna becomes the object of envy and hate of the villagers and has to fight to preserve her independence. Set in the Polish countryside on the cusp of the 19th and 20th Centuries, the story’s dramatic turns tie into the changing seasons, hard labour in the fields and traditional local holidays.