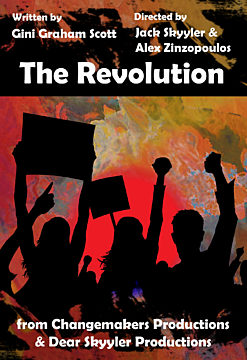 The Revolution is set in a near future -- in 2050 -- when an autocratic government has taken control of the United States and rebel groups have been trying, so far unsuccessfully, to seek a new democratic election and to take back their democracy.

Now a new potential but unlikely leader of the rebels has emerged -- a singer/songwriter, Dan Messenger, who sings songs about the need for revolution and a return to democracy, including his signature song: Viva La Revolution. He has been singing in small coffee houses and cafes at a time when most people are masked, because a deadly pandemic is continuing to sweep through the land. It mostly kills the poor, while the wealthy go around with plastic headgear with viewing panes, enabling them to mingle normally. The workers only get to wear this headgear at work, but otherwise, they have no protection, except for some cloth masks and bandanas they put together.

The members of one of the rebel groups hear Dan sing, and they urge him to become the voice of their group. They promise to unite other rebels behind him. Dan agrees, though the other rebels initially continue to fight among themselves for control. But finally, he takes more leadership and eventually becomes the rebel leader who brings the rebels together.

Meanwhile, as he becomes known, he faces threats from those in power to silence his voice. While he is doing an interview on TV, the station is bombed, but he escapes. There is one plot to kidnap him; another to send him anthrax in the mail; and an attempt to poison his tea and coffee. Some foreign governments are also in league with the U.S. dictator to kill Dan. But he manages to outwit them all.

Then, when it comes time to vote, there are battles at the polling places, efforts to burn ballot collection boxes, and efforts to claim the battle is rigged. But eventually, the rebels win the battle, and as the autocratic and his cabal are carted off to prison, the film ends with a celebration and singing the Viva La Revolution song.