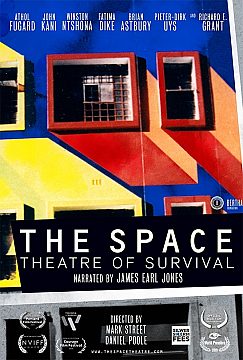 The Space - Theatre of Survival

Narrated by James Earl Jones, ‘The Space’ tells the forgotten story of a South African theatre company which in the 1970s dared to defy the government’s apartheid system, and whose brave artists performed ground-breaking work which reverberated worldwide and shone a spotlight on an unjust and violent regime. Despite the threat of incarceration or worse, this group of black and white resistors, including Brian Astbury, Athol Fugard, John Kani, Winston Ntshona, worked together to create a ‘Theatre of Survival’ - a place where, no matter the colour of their skin, the voices of all artists could be heard.