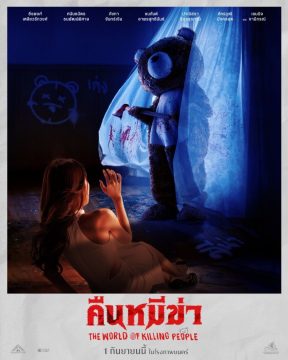 The World of Killing People

After not seeing each other for a long time, 5 teenage friends living in the city of Bangkok decide to escape their boring lives by going on a camping trip together. The most joyful one of the group, Aim, the girl who thought up the idea of the trip has a boyfriend named Win who reluctantly agrees to go with her due to his unemployed status but believes he would impress her if he does.

Win’s best friend, Tony, a lazy pothead gets invited on the trip by both of them with expectations to sleep with one of the friends, Nan, the hot model of the group. Paying for the whole trip is their millionaire friend of the group, Chang, who is a successful business owner.

On their trip, the group stay at a resort isolated from the city. They all party and have a good time until things take a dark turn when it’s revealed each of them have hidden secrets that one another don’t want to find out and unbeknownst to the group there is someone observing them.

When one of them ends up brutally murdered, paranoia and distrust surrounds the group motivating each remaining member to accuse each other of being the murderer or deeming the possibility that the real murderer is the unseen presence observing them and that they all are in danger.