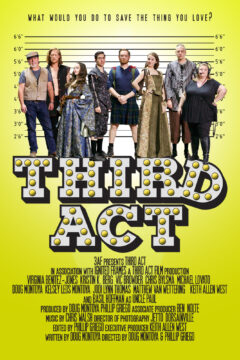 What would you do to save the thing you love?

And what if that thing is your community theater family? After being given news of their pending eviction, The Box Theater’s lovable and talented theater troupe plots a bank heist.

Adam, the theater director, has got a second-mortgage on his house to keep the group going, but after three months of no payments his house is being foreclosed and the theater is being evicted. Adam has to break the news to the group at their meeting. Since Abbey handles everything for Adam, she already knows the trouble is real.

Adam tries to sugar coat the eviction to the troupe, but they take the news as the end of the theater world as they know it. After brainstorming some ideas that won’t really help Abbey announces her plan “we could rob a bank!”

Abbey is the group’s theater manager and overall ‘mom’ to this group of misfits. Her Uncle Paul is the President of a Credit Union who launders money for Rick, a shady Albuquerque business guy. Abbey’s plan is to “borrow” the dirty money Uncle Paul hides in his office and then return the money once they are all caught up on bills.

Abbey has already convinced Uncle Paul to let them film a short film for the “55-Hour Flick Fest” overnight at the bank if they just list him as a Producer. The group agrees to borrow the money that the “bad guy” keeps at the bank and then return it before it is missed.

Everybody has their own idea of how to rob a bank which leads to mishaps galore. Jackhammer? Mission Impossible cantilevered drop though a skylight? Drug Uncle Paul?

Let’s make a movie and steal some dirty money!

The team shows up to film only to find Uncle Paul couldn’t be there. He’s left a security guard with a gun to watch over the film shoot. Complicating things even more the team bring in background actors, a wide array of wardrobe options and the two leads are falling in love while filming!

While the troupe can perform a shakespearian play reworked to take place on space station, being criminals sets their anxiety on high alert. The team find the hidden money and takes their “loan” from Uncle Paul’s office.

They run out of time to complete their film for the competition, and they lose their nerve. They decide to put the money back and get out of there. With the help of the security guard Gus they get the rest of the film done and submitted on time. They are very proud of their love story about a bank heist by a time traveler and it is a musical!

This is some Breaking Bad sh*t!

The group wins every award at the festival for their film and they are riding high on the wins thank to Gus’s help. Still depressed over the eviction they all part ways to sulk. When Adam get’s home his front door is open. He finds bad guy Rick and Uncle Paul at his dining room table demanding the stolen money back.

The group uses their thespian ways to force the truth to come to light, but only after a few gunshots, half-naked lovebirds, devious plots to take down Uncle Paul, a mix of death and deception using Shakespeare’s top characters and a duel to the death.