Home / Films / This is Sparklehorse 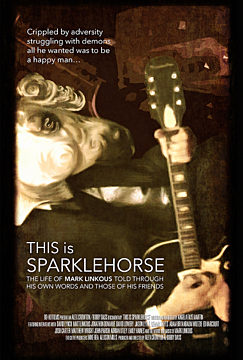 1995. On the cusp of big things, Mark Linkous, the musician known as Sparklehorse was touring his critically acclaimed 1st album when tragedy struck. He collapsed in his hotel room, legs pinned underneath his body for hours. His heart stopped when paramedics tried to move him. He died for several minutes. After resuscitation, Linkous spent months in hospital, paralysed. This incident would cast a long shadow on the corridor of his life.

This documentary chronicles his life and pays respectful tribute to an artist feverishly beloved by his cult followers. An artist far removed from the mainstream of music, his existence mirrored his mesmerising and unique music.

Written and narrated by Linkous’ friend and collaborator, Angela Faye Martin, the film paints a balanced portrait of an individual of immense talent and singular vision, charting his highs and lows with a poetry and hand-crafted aesthetic.