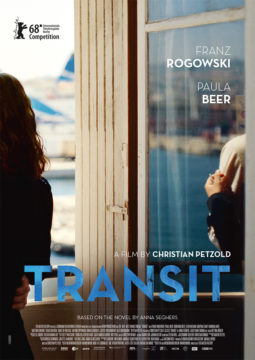 German troops are fast approaching Paris. Georg, a German refugee, escapes to Marseille in the nick of time. In his luggage, he carries the documents of an author, Weidel, who has taken his own life in fear of his persecutors. Those documents include a manuscript, letters and visa assurance from the Mexican embassy. In Marseille, only those who can prove they will leave, may remain. Visas for possible host countries, transit visas, and those scarce tickets for passage by ship are much needed. Georg has memorized Weidel's papers and assumes his identity. He delves into the quasi-existence of flight: refugee chatter in the corridors of a small hotel, the consulates, cafés and bars that line the harbor... He befriends Driss, the son of his comrade Heinz, who died on the run. Why move on at all? Are new beginnings possible elsewhere anyway? Everything changes when Georg falls in love with the mysterious Marie. Is it devotion or calculation that has led her to share her life with a doctor, Richard, before journeying on in search of her husband? He's said to have surfaced in Marseille in possession of a Mexican visa for him and his wife.