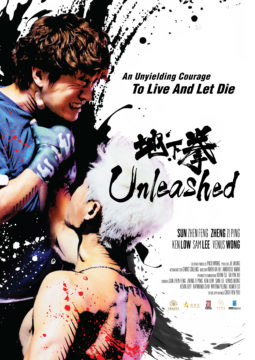 An unyielding courage, to live and let die!

Fok Kit is the hottest underground boxer, with his unbeatable records. His great success thanks to the outstanding tutor - Debo.

After few years, the business of the boxing studio went bad. Fok Kit must win this battle against Sholin who is well-known as “Killing Machine”, to keep this place. After a bloody fight, Fok Kit is defeated and hurt badly.

It is a set-up by Lok who was Debo’s follower ten years ago, and his reputation is much higher than Fok Kit’s ever made. He was arranged to fight with a Cambodian boxer after encouraged by Debo. He totally lost and never can face himself again. Since then, he became drugs addicted with huge debts, and sentenced to jail for years. Throughout the years, he blamed everything on Debo’s fault. After got out from jail, Lok pretends to buy the property and wanted to kick Debo out of the building. Thus, Debo has to arrange this battle. Lok thinks he could revenge Debo by his loss of Fok Kit.

At the same time, Che Debo suddenly became a failed master and decided to fight with Qiu Li! Che Debo, who has been in a downturn, has been repeatedly knocked down by Qiu Li, but he has been standing up. Huo Jie was moved by the master's insistence and decided to protect the master and challenge Qiu Li again, because in addition to his skills and physical strength, he still believes that he has Confidence that can be stood up when knocked down!