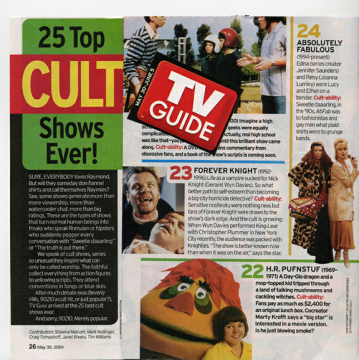 VAMPYRA – a reluctant vampire who has a podcast about her life on the dark side tells of her serial adventures in the paranormal and the supernatural. A largely mercantile impulse, "Vampyra" trades on my vampire cred (I’m the creator of the 70 episode USA Networks vampire-detective series, “Forever Knight,” one of the TV Guide “25 Top Cult Shows Ever!”) and I want to do it again. This time it’s a woman, a newspaper reporter covering a murder who discovers, in the feature length movie that will serve as our pilot, real vampires hang out in plain sight among the pretend vampires at an upscale Goth club, and that she, too, is suddenly descending into vampirism, at the hands (and teeth) of the handsome vampire she’s fallen for. Using her new vampire powers, and with the help of her BFF, a femme-hipster photojournalist who is also succumbing to vampirism, she solves the crime. But who’s leaving all the drained bodies around town? It’s the reporter’s new vampire lover! The two women dispatch him in a blazing climax, then leave their newspaper to begin shooting sequels (our episodes) via a podcast that reports on dastardly doings on the darkside of the paranormal and the supernatural. The photojournalist just loves being a vampire, but Vampyra hates it! Her search for a cure provides a serial thread as does her relationship with her photographer partner and their friends on both sides of “the dark curtain.” Fans think the podcast is fiction but Vampyra is a distaff Nick Knight, and more woman than “Buffy.” I own the outline and control the series via an agreement in which I step up for all polishes and rewrites (I have a few ideas waiting).