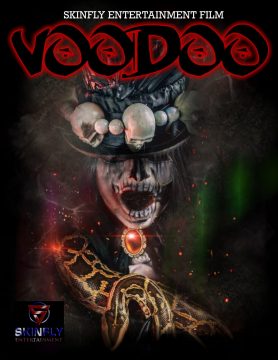 In the backdrop of New Orleans Mardi Gras, pre-med student, GRACE KINCADE is found brutally murdered at a graveyard site in what appears to be a voodoo ritual. Her brain has been removed and a voodoo symbol is carved into her back. Seasoned homicide detective, MAX DUBLIN and his partner, CHARLIE WILKES are sent to investigate the murder. Taking a deep dive into the underworld of Louisiana's black voodoo culture, Max and Charlie learn that a mysterious, evil voodoo priest, DAMBALLAH is behind Grace's murder. Along with his accomplish, ZOLA, a voodoo snake dancer, Damballah has been preforming rituals for local drug lords, the MACHADO BROTHERS, to protect their business opera- tions. Convinced that their good fortunes are the results of his black magic, Damballah insists upon being given a position of power in the drug lords empire. When the Machado Brothers refuse Damballah's demand, their family members suddenly start experi- encing curses and spells and some disappear. Their bodies turn up later with voodoo symbols carved into them. In this terrify- ing world of black voodoo, Max and Charlie must travel deep into the Louisiana swamp to track down Damballah, Zola and his cult followers to put a stop their sadistic ways and put an end to the Machado Brother's drug empire.