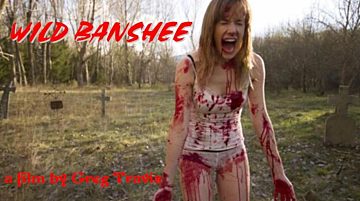 Wanda “Wild” Banshee is a young girl of eighteen. She is finished with high school

and still living with her parents, doing odd jobs and trying to figure out what she

wants to do with her life. She is trying persuade her boyfriend, Hector Montoya, to

take her on a proper date. He consults his friend, Johnny, and comes up with an idea

of taking her to a Zip Line park for their first official date.

but she’s not sure what she wants to do, because she doesn’t know who she really is

yet. During dinner her parents try and advise her but it back fires and makes her

Later that night, she is awakened by the shill scream of the Wild Banshee coming

from the woods outside her house. He parents wake up from the scream too and

all are shaken to the core. The sound is so horrible and disturbing, it is hard for any

of them to go back to sleep.

A few days later, Wild sets out with Hector on there very first proper date at a Zip

After encountering several unusual staff members, they do the Zip Line and ride all

the rides and do the actives at the park. After swimming in the pool, they find a

private spot near woods. They start kissing and this his turns into heavy

petting and then love making.

Afterwards Hector gets up and finds a place to take a leak in the woods. There he is

attacked and his head is chopped off by the deranged Grounds Keeper.

Still naked, Wild goes looking for him. She finds his severed head on the ground. Not

knowing who it is, she picks the head up and Hectors eyes open. She drops the head

and then turns to see the Grounds Keeper. They talk and then he comes after her.

totally naked and she tries to hide and find ways out of the park. He keeps finding

her and finally tracks her down to a graveyard. They fight and she runs away and

finds two cops on the old blacktop road. They stop and help her but then the

Grounds Keeper finds them and shoots the cops dead. He captures Wild.

The final act takes place in the basement of the Grounds Keepers remote old house.

He keeps her in a cage. Also there is another Prisoner in another cage called General

Bobo, which is a deformed creature. Together they finally attack and overcome the

Grounds Keeper. She escapes and reunites with her parents.