Home / Films / Women in the Castle 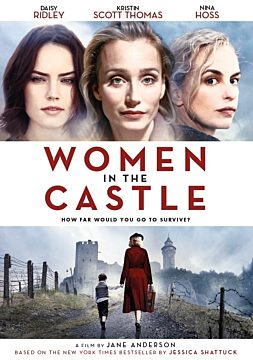 Women in the Castle

In war they made impossible choices. In its aftermath, can they live with them?
Post-war Germany: a country compromised – every citizen tarnished by complicity with the Nazi regime, and yet willing the past to disappear as they build a future from its ashes.

But for Marianne – widow of a man murdered for defying the Nazi regime – the past must be spoken for. She cannot simply forgive her compatriots for what they’ve done, to her life and to her once-proud nation.

She finds refuge from this rapidly transforming world in her family’s crumbling castle where she once played host to Germany’s liberal elite and there fulfills her promise to find and protect the wives and children of her husband’s brave conspirators.
Rescuing her dearest friend’s widow, Benita, from the Russian army, and Ania, from a refugee camp, Marianne assembles a makeshift family, certain the women’s shared pain will bind them together.

But as Benita begins a clandestine relationship and Ania struggles to conceal her Nazi past, Marianne learns that her clear-cut, highly principled worldview and moral certainty has no place in these new, frighteningly ambiguous and emotionally charged days.
All three women must grapple with the realities they now face, and the terrible consequences of decisions they cannot undo.

Deeply moving and compelling, Women in the Castle, adapted from Jessica Shattuck’s New York Times bestseller, is a heart-wrenching and hopeful tale of secrets and survival, a reckoning… and the astonishing power of forgiveness and reconciliation.