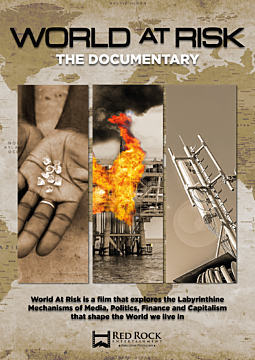 World At Risk is a film that explores the labyrinthine mechanisms of media, politics, finance and commerce that shape the world we live in.

Do governments actually govern us?

If so, how do they do this? And why do they do it? What are their motivations? Social Media and the internet has galvanised new awakening in the masses, like never seen before and this film endeavours to bring a new perspective to that on a global scale.

For years, stories of corporate/government cabals have been dismissed as fodder for conspiracy theorist around the world.

This film takes a ground zero examination of the circumstances and details that redefine conspiracy behind the military industrial complex into reality.

This film is about the mechanics and motivation of global governance. And how our planet’s resources are exploited to fund and justify conflict, terror and control.

How a financial system has been created to support this through the Central Banking System and its use of the little understood fractional reserve lending and the role the Bank of England plays in it.