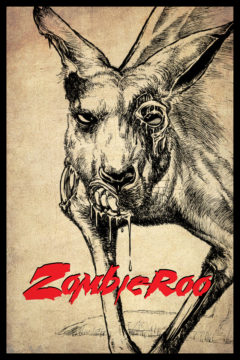 Twenty-something Rachel has lived on the sprawling nature reserve she calls home all her life. She and her father Don struggle to attract tourists to their park, despite being the home of former drawcard “Roger The Big Red”: A freakishly large Kangaroo.

When the local wildlife mysteriously start falling ill and dying, Rachel and Don investigate. Unbeknownst to them, an outbreak of toxic algae in the local river is to blame. But this outbreak is different: it’s growing at a rapid rate and is seemingly evolving into something else entirely.

When the rickety tour bus Rachel and Don are transporting their guests in breaks down in the middle of the wilderness, Rachel is suddenly confronted by a snarling, unrelenting Roger The Red. He’s taken a drink from the contaminated river and has morphed into a bloodthirsty zombie-roo with one motivation: feeding on the living. With the tourists trapped on the bus and Roger the only obstacle between them and freedom (or death), an intensely harrowing night awaits.