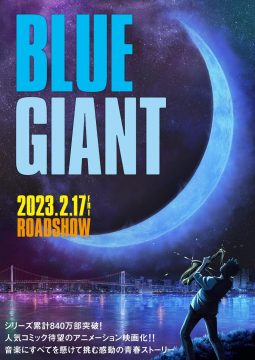 Dai Miyazaki practices saxophone under the bridge everyday, snow, rain or shine, it doesn’t matter. A coming-of-age story about him
becoming the No.1 Jazz player in the world.

Dai Miyazaki is a high school student living in Sendai, Miyagi prefecture. He has a dream to become the “No.1 Jazz player in the world” as a saxophone performer and moves to Tokyo.

Dai starts living at Tamada (His high school classmate)’s room and learn about the Jazz scene in Tokyo. At one of the Jazz clubs, he discovers Yukinori who can play a piano solo with only one hand. Dai sees so much potential in him that he asks Yukinori to hear him perform and form a band together. A couple days later, Yukinori hears Dai’s powerful solo performance which is a result of his extreme hard work. Yukihiro is moved and decides to form a band with him but notice Dai plays too freely outside the box and a drummer is needed for the band. Yukihiro struggles to find a drummer but Dai’s roommate Tamada who was looking for something he can be passionate about, become interested in playing the drums with them. Yukinori initially rejects Tamada who is a beginner drummer, but eventually accepting him their band “JASS” is officially formed.

Their first performance had only three audiences. But with their exceptional talent and courage, JASS’s popularity grow quickly, And making it possible to perform at the top Jazz club in Japan “So Blue”. Their success seemed to continue until…