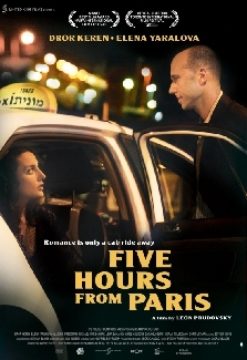 Yigal is, at first glance, a mild-mannered everyman who maintains a close relationship with his ex-wife and her new husband because of his devotion to his son. Yigal drives a taxi for a living, and while he is a master of ground travel, he harbours a secret fear that stands in the way of his lifelong dream: he yearns to visit Paris but is petrified of flying. Dropping his son off at choir practice one day, he catches a glimpse of the music teacher, Lina (Elena Yaralova), whose dark, dimpled beauty belies a growing emotional unrest. Dateless since his divorce, Yigal proceeds in small steps, even when Lina discloses that she and her physician husband, Russians by birth, will soon emigrate to Canada. Yigal insists he wants nothing more than friendship, and the two begin a tentative emotional minuet.