Page d'accueil / Films / Not On This Night 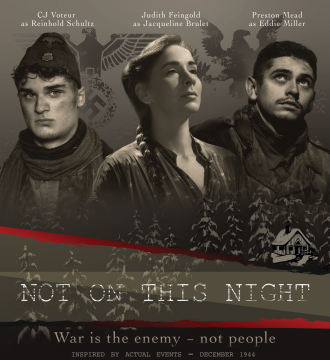 Not On This Night

The story centers on a chance encounter between enemy combatants in a small farmhouse, the home of a young French woman, Jacqueline Broulet, in the Ardennes Forest on Christmas Eve 1944. As the Battle of the Bulge has been raging around her for weeks, Jacqueline unexpectedly finds herself sheltering and tending to two young, wounded soldiers, one American, Eddie Miller, and one German, Reinhold Shultz, who have been lost in the woods after being separated from their units. As the night passes, enemies see themselves as human beings. Humanity prevails, even in the bloody, wretched depths of war.