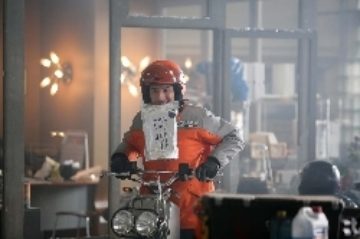 From multicultural Paris to designer Paris, Montmartre to the Champs-Elysées,
sleazy sidewalks to high-end galleries... Watch out! Sam the courier is a man on a
mission!
On his scooter, Sam (Michaël Youn) breaks every rule of the road to make good
on the "express delivery" promise of the courier service he works for. But however
hard he tries, Sam never gets a bonus from his boss, never beats his slicker colleagues
and never gets past his Dad, a cop who books him every time. All Sam
has up is Nadia (Géraldine Nakache), and she will turn on him if he doesn't show
up for her sister's wedding. Trouble is, Sam has one more delivery to make and his
day has just gone from bad to worse...
After the huge success of the Taxi franchise, France has found another accidental
hero in the shape of speedy Sam the delivery man who innocently scoots into
the heart of an art smuggling scam run by a shady organization called The Sphere.
On his trusty two-wheeler, Sam puts his life on the line to reel in a missing Rembrandt
and keep his girl. Michaël Youn (Iznogoud, Around The World In 80 Days)
toplines in this street-smart comic adventure alongside Heroes star Jimmy Jean
Louis and two of France's hippest, sexiest young actresses, Géraldine Nakache
(Comme t'y es belle) and Catalina Denis (Go Fast).