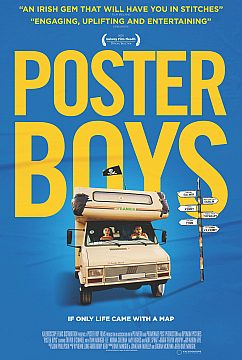 When broke Irishman, Al Clancy, mistakenly agrees to mind his smart-ass 10-year-old nephew, Karl, for a week, his job and home are placed in jeopardy. In a bold bid to save Al’s unfulfilling but undemanding job as a poster boy, they steal the family camper-van, embarking on a madcap, impulsive postering tour across Ireland. But the unlikely pair soon realise it may be more difficult than they realised to survive a week in each other’s company...

A semi-autobiographical comedy featuring a range of brilliant new Irish talent (and a memorable cameo from Boyzone’s Keith Duffy), this festival favourite is a road-trip adventure with undeniable heart and an uplifting message at its core; that families need to look out for each other no matter what circumstances they may find themselves in.