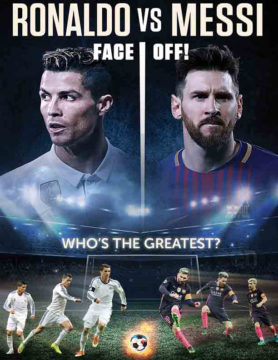 Ronaldo vs Messi: Face Off!

In the world of ‘football’, there are only two camps when it come to the greatest players: Cristiano Ronaldo and Lionel Messi! Experts compare their upbringing, their progression into the world of sports, their skills and talent, their influence on the game, and their marketability on and off the field. We hear from the rabid die-hard fans, their colleagues and competitors and we debate which player is the best-of-the-best.