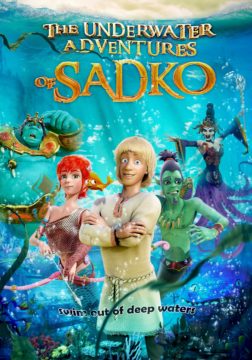 The Underwater Adventures of Sadko

Life is always hard for people of artistic inclinations. The young Sadko, a peasant’s son, doesn’t want to work in the field like his parents. What he does want is to play his gusli all day long. In his defense, he really has a knack for it.

The powers that be notice Sadko’s talent and order him to the Prince’s palace, where they sit him in the corner and command him to play his music as Nastya, the Prince’s daughter, chooses a suitor. Nastya, however, rejects them all and only has eyes for Sadko. Sadko flees Nastya, the palace, and the wedding, and finds himself at the bottom of the sea, befriending Jacob, the talking parrot, on his way. The Sea Kingdom is going through some turbulent times: the wicked Priestess has seized power.

To return home, Sadko and Jacob must defeat the Priestess and wake up the Sea King. Overcoming a great deal of difficulties, Sadko finds true friends and true love—Princes Ling, the Sea King’s daughter—at the bottom of the sea.