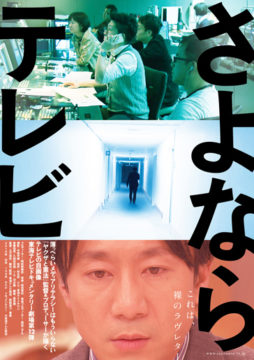 On the Tokai Television news floor, the director, Hijikata, hands out a project paper of a documentary movie, mounts the microphone on the desk, and starts filming. Managing editors are confused and the filming is refused.

Sawamura, an experienced press person, reports on a case in which a man who claimed to oppose the construction of a high-rise apartment was arrested for having trouble with the site supervisor. He perceives this as a matter of conspiracy and that it is important for the mass media to monitor power, such as the government. At the time of a forced vote for conspiracy in the Diet, he thinks that the media that is not called "conspiracy crime" but "anti-terror preparation crime" will support the government without criticizing it. So, he uses a word “conspiracy” on his news draft. In line with the unification of Fuji Television affiliated terms, Tokai Television also reports that "anti-terror preparation crime." Upon seeing it, he laughs forcelessly.

Watanabe is dispatched by a production company to recruit personnel, but despite having work experience at other stations, his work has not been overlooked. Due to lack of confirmation with the interviewee, the coverage is canceled just before the broadcast because of a complaint by the interviewee. Watanabe says, "I'm a temporary employee, and if I don't get results, my contract will expire in a year."

Tokai Television brings out a newscaster, Fukushima. He has been selected as the main host of the evening news show; however, He doubts his talent as a newscaster. In 2011, he had an experience that his news show was discontinued because of inappropriate ticker accident. After the accident, Tokai Television holds an annual company-wide conference of broadcasting ethics. In individual interview following the conference, he talks about difficulties of facing the coverage.

In spring, Fukushima steps down from the news program host, and Watanabe also leaves Tokai Television. On the last day of the interview, Sawamura asks the director, "What is reality for this documentary…"