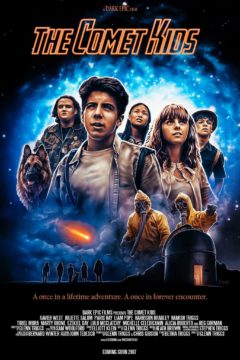 Lucas’s Dad wakes him one night. He has important discovery to show Lucas. They go to the observatory where Lucas’s Dad works. They are joined by Cliff, the assistant. His Dad has discovered a new Comet that will orbit the sun one year from today.

Jump forward to present day, a now 88-year-old Lucas lives in a nursing home, and waits impatiently for his daughter to drive him to the observatory to watch the Comet return to the night sky after 74 years. Not wanting to wait anymore for his daughter any longer, Lucas goes himself.

Returning to Lucas age 14, he and his friends are walking home when they see a bright flare blaze across the sky. It lands very close to their town. Could it be a piece that has broken off the passing Comet that Lucas’s Dad had discovered?

Unfortunately, Lucas’s Dad died soon after his discovery so never had the chance to see the Comet. Lucas feels compelled to search for the piece that has fallen to Earth. However, two scientists are also after the same piece of the Comet.

Having almost reached the Comet, Lucas and his friends are confronted by the scientists and Lucas discovers that one them is Cliff, his Dad’s former assistant. Cliff wants the fame for discovering the Comet but with the help of his friends, Lucas fights off the Cliff and claims the Comet for his Dad.

Returning to present day, 88-year-old Lucas watches the Comet overhead at the observatory. His daughter finally arrives worried that Lucas had left the nursing home. But as they sit at the base of the telescope and watch the Comet return to the night skies, Lucas and his daughter are emotionally moved by their shared experience and Lucas is grateful to have seen the Comet twice in his life.