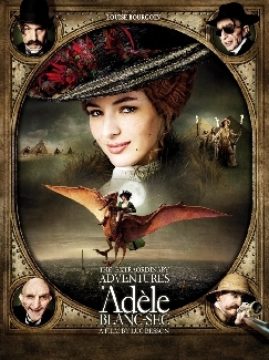 THE EXTRAORDINARY ADVENTURES OF ADELE BLANC-SEC

The year is 1912. Adèle Blanc-Sec, an intrepid young reporter, will go to any
lengths to achieve her aims, including sailing to Egypt to tackle mummies of
all shapes and sizes. Meanwhile, in Paris, it's panic stations! A 136 million-yearold
pterodactyl egg on a shelf in the natural history museum has mysteriously
hatched, and the bird subjects the city to a reign of terror from the skies.
But nothing fazes Adèle Blanc-Sec, whose adventures reveal many more
extraordinary surprises...
Set in the carefree world before World War I, Adèle Blanc-Sec's adventures
see the brave young woman fearlessly battling crooks, corrupt politicians,
demon worshippers and mad scientists. Legendary cartoonist Jacques Tardi's
original stories perfectly recreate the intrigue, romance and excitement of
one of the most tumultuous periods in history.
Adapted and directed by Luc Besson (Arthur and the Minimoys, The Fifth
Element, The Professional), Adèle's exhilarating, funny and fabulous adventures
will be one of the most eagerly anticipated releases of 2010.