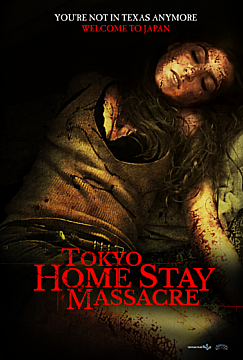 You're not in Texas anymore. Welcome to Japan.

Three American late teens travel to Japan to escape a sad past and have some fun but end up trapped in a house with a demented Japanese host family who plans to offer them to their gods in a sick ancient Japanese ritual.

TOKYO HOME STAY MASSACRE is an intense horror experience, with explosive Japanese energy, while flirting with dark comedy. Through our American heroes, the story introduces the audience to the ancient Japanese tradition of Hitobashira, or The Human Pilar. In ancient times, the local Japanese people used to cement the living into walls, into pillars, or bury them alive under the foundation of their houses, to please the gods and protect their homes from disaster.