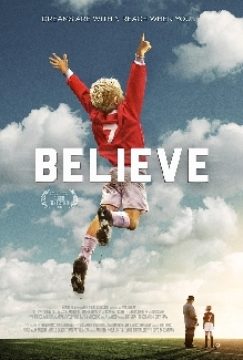 Set in 1984 and inspired by true events, 'Believe' is a funny and touching fictional tale about the legendary Manchester United football manager Sir Matt Busby, who helps a wayward boy fulfill his dream. An act of petty crime by 11 year old Georgie becomes a collision of fate as Sir Matt tracks him down, only to discover that the boy is an extraordinarily gifted footballer and captain of a team of unruly talents. Having lived with football all his life and survived the tragic 1958 Munich plane disaster, in which eight of his young players were killed, Sir Matt is still committed to continue his work of 'training lads for life' and so begins a thrilling adventure as Sir Matt Busby, comes out of retirement to transform a young group of scallywags into a dream team.