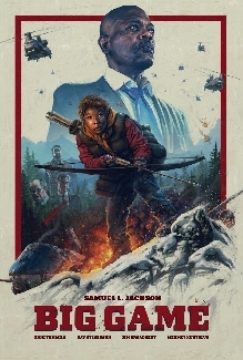 Driven to a remote forest by his father, Oskari, a timid 13-year-old, anxiously awaits his fate. Tradition dictates that like his forefathers before him, the boy's time has come to spend one day and night alone in the wilderness, surviving on nothing but the fat of the land. Armed only with a bow and arrow, he must return with a prize to prove himself to be a man. Terrified and alone, he wanders through a vast and unforgiving forest when suddenly he hears a deafening rumbling sound and the ground beneath him shakes. Racing to investigate, Oskari discovers, to his utter amazement, an escape pod. Not just any escape pod - this pod belongs to Air Force One an the battered and bruised man lying before him is the President of the United States!

In the skies above, terrorists, having disposed of the secret service agents are hurtling their way to the crash site hell-bent on kidnapping the President.

Now the fate of the most powerful man in the world lies in the hands of a 13-year-old boy. Plunged into a deadly game of cat and mouse with only hours to spare, Oskari and the President must team up to survive the most extraordinary night of their lives.